Very little, as in non existent.  These babies went out with the bath water.  Let this be a lesson to all of you, just because your silicon muffin pan *can* float in your water bath, it doesn't mean that you should let it.   Heed Rose's advice and put in that wire rack for them to rest on. 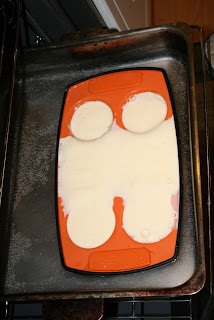 Because just like at sea, the swell picks up more than a little when there is a bit of movement in the tectonic plates so do does the water in the roasting pan when you attempt to slide the shelf back into the oven.  Unlike at sea, where you can batten down the hatches and let the waves wash over, those little roasting pans waves just washed in and didn't wash out.

And note, that hopping from leg to leg whilst uttering expletives doesn't prevent the second tray from succumbing to the white caps in the water bath. 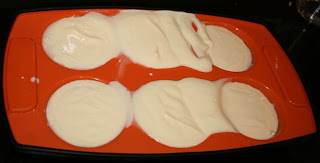 Devastation.  I was very much looking forward to eating my way through sharing twelve cheesecakes this week.  So perhaps it was my subconscious (and my wardrobe) that resulted in disaster.  My wardrobe would say that this was an no great loss compared to the damage twelve, albeit wee, cheesecakes would have done to my waistline...

The weekend wasn't a complete baking disaster.  I managed to whip up a batch of very well received whoopie cakes.  They went head to head with the most elaborate cupcakes I have ever seen.  Lets just say that no one asked for the recipe for the cupcakes... 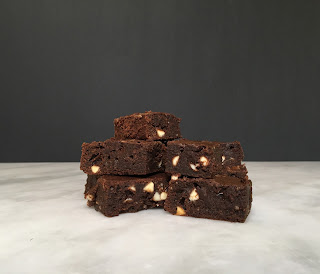 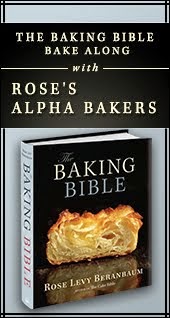